During December I visited my family in Florida for the holidays. I’ve done this before but had never been to Miami in any of the years that I’ve gone to Florida. So I made it a point to plan a mini trip to Miami while there. On my list of things, I wanted to see? The Wynwood Walls, La Placita, and the beach. The extra spots that we visited while there was a bonus. Here’s everything that we saw, did, and some of what we ate. And boy did we EAT! Here is a December trip to Miami.

The Drive To Miami

Because my family lives in Tampa and is where we stay when visiting them, I knew we would need a car not only to see things on our own in town but for the long road trip to Miami. From my family member’s house to the Wynwood Walls, our first stop in Miami, it took around 3 hours and 54 mins. That was the shortest way and required a toll to be paid. A large portion of the drive required crossing from the west of Florida to the east via Route 75, or what the locals call, “alligator alley”.

This is supposedly because alligators like to come onto the swamp level highway and sunbathe. We did not see any alligators going or returning, but it’s good to know. You know you are getting closer to Miami thanks to the traffic congestion. Which reminded us of when trying to drive in and out of NYC.

The very first thing we did when getting to Miami was drive to the Wynwood Walls. The famous art plastered walls grouped in Midtown Miami, near the Art District. Artwork and graffiti are immediately seen when you enter Miami, but this “urban graffiti art museum” was intentionally created to bring life back to the community.

In the early 2000’s it consisted of abandoned warehouses and was known as a crime hotspot. When Joey and Tony Goldman of Golden Properties discovered the abandoned property they took it on. Wynwood Walls was officially opened in 2009 with six warehouses serving as canvases for street art. Over the last 10 years, it has hosted art from over 100 artists from over 20 countries. In total, the artwork covers 85,000sq ft of walls.

I knew I would love this place, not only because I had been drooling over it on Instagram, but because of my appreciation for all things art. And if you appreciate the graffiti and art that covers walls in NYC, you’ll appreciate this too. I will say it was CROWDED, it is a tourist attraction after all. So pack your patience. 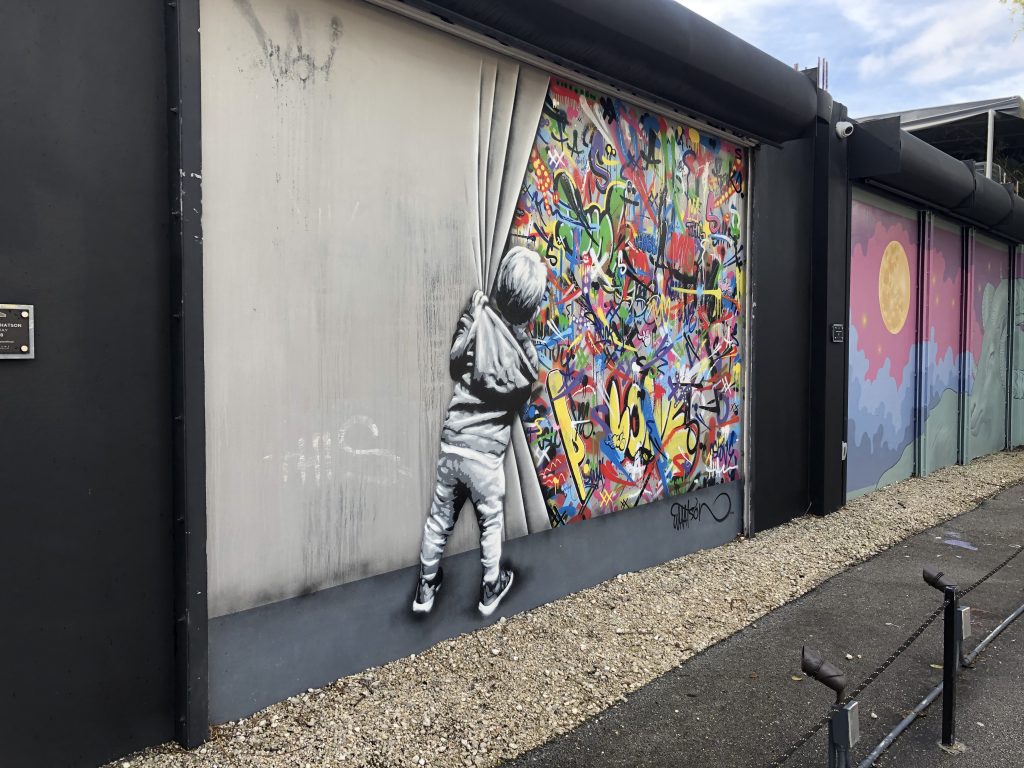 After dropping our bags off at our room for the night our next stop was “La Placita“. This Puerto Rican restaurant was also a spot that I had been insta-stalking for a while. This restaurant was inspired by a market plaza in Santurce, Puerto Rico, and was started by Chef Jose Mendin and actor Julian Gil. It serves typical Puerto Rican cuisine that I stuffed myself with.

The décor of the restaurant is full of Puerto Rican staples like Pilon’s engraved with names of famous visitors, Vejigante masks, and Taino symbols. And of course, the flag, which wraps the exterior and can be found inside as well. They also have domino tables for people to play. Also not to be missed is a yummy-sounding Brunch menu on the weekends. Next time I go, I’ll be sure to make it for brunch. 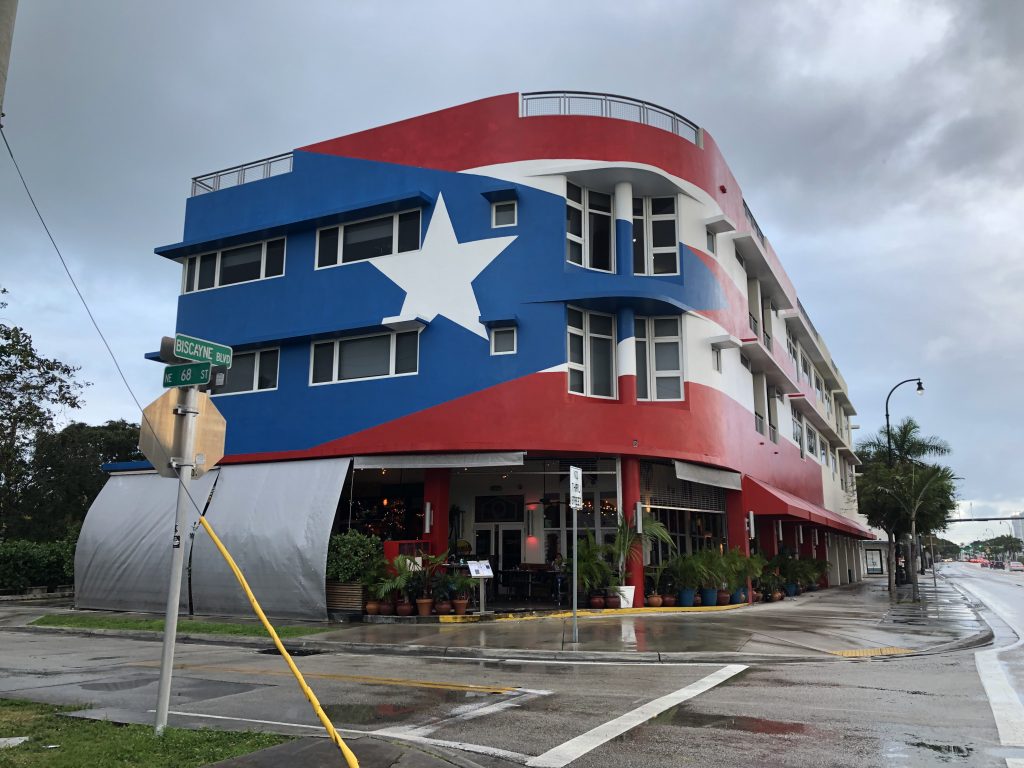 After all the eating we did, walking was needed! And why not do that at the beach? So naturally, a trip to South Beach was next. From the restaurant to South Beach it was about a 30 min drive. The buildings in South Beach are a mix of modern and original art deco architecture which gives you an idea of what Miami used to look like.

The beach was CLEAN! Sure it was not exactly the season for visitors, but there were small groups on the beach and the overall beach was cleanly. I loved the colorful lifeguard houses and the boardwalk. The boardwalk was a simple walk amongst trees in between the beach and hotels. That day was rainy, so we got a bit soaked walking the boardwalk, but it was an experience that I enjoyed just the same.

The agenda for the next day was to visit the Vizcaya Museum and Gardens and Calle Ocho. Vizcaya Museum and Gardens was originally the winter estate for Chicago businessman, James Deering. In its prime, it was 180 acres and consisted of the main house, gardens, buildings in South Miami for staff, machine shops, and farm necessities. Currently the estate consists of 50 acres. It was created by James Deering, F. Burrall Hoffman, Diego Suarez, and Paul Chalfin who served as the designer, garden planner, and artistic director.

They took architectural influence from Italy and other parts of Europe and built it by 1916, taking only two years to complete the main house. The gardens were completed in 1922 and were intentionally built on the Biscayne Bay in between a mangrove shore and forest. In doing so and preserving the estate’s surroundings Deering became known as one of the first environmentalists in Miami. In 1952 it became a museum and is now considered a national historic landmark.

This is a BEAUTIFUL place and it really is so relaxing. It’s as if your stepping into a peaceful time of European history. We walked the entire main house and surrounding gardens in around 3 hours. Statutes, plants, trees, fountains, and different passageways are found everywhere you walk amongst the gardens. While inside includes 54 rooms, of which 34 are open to the public. This is a must if you like museums and history when visiting Miami. You can read more about Vizcaya in this post.

Walking the grounds of the Vizcaya Museum and Gardens made us hungry, so the next stop for us was the Puerto Rican restaurant, Mofongo, on the famous Calle Ocho. The restaurant’s décor and food made us feel at home, just like La Placita did. Everything was delicious! 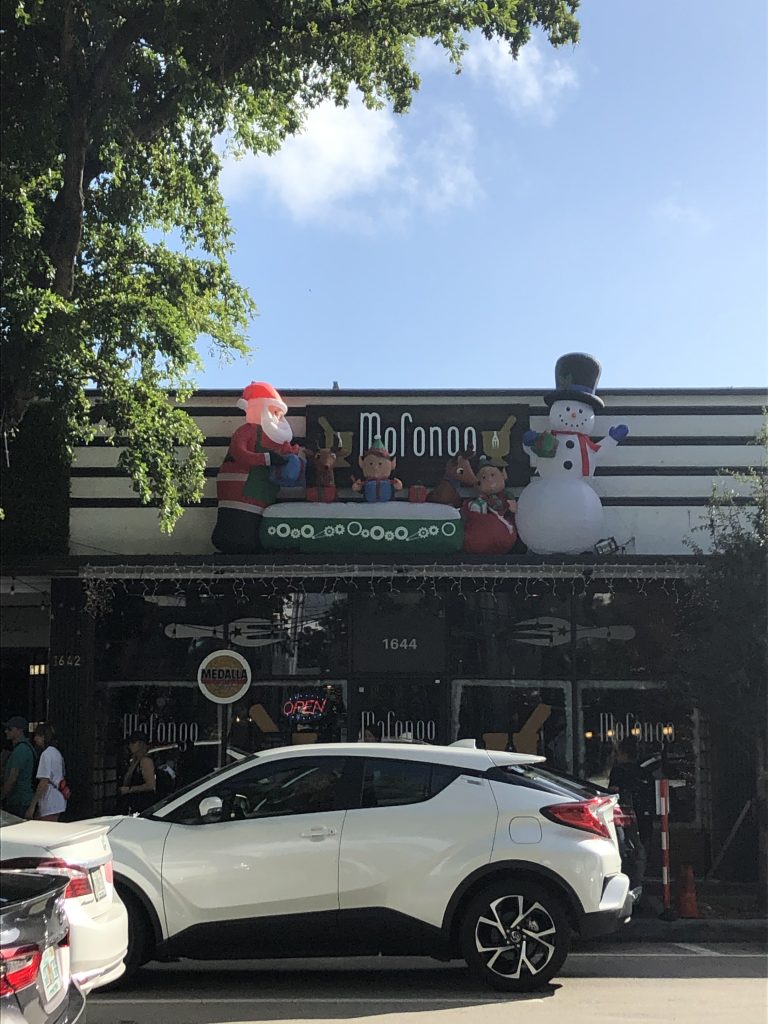 A walk up and down Calle Ocho was the last thing we did before leaving town. The street was vibrant with murals of Latin icons, live music pouring out of restaurants, statues to Cuban revolutionaries, and Domino Park. While there don’t be surprised if you hear roosters. They walk the streets freely and are protected by the city. Something that reminded me a lot of Puerto Rico. 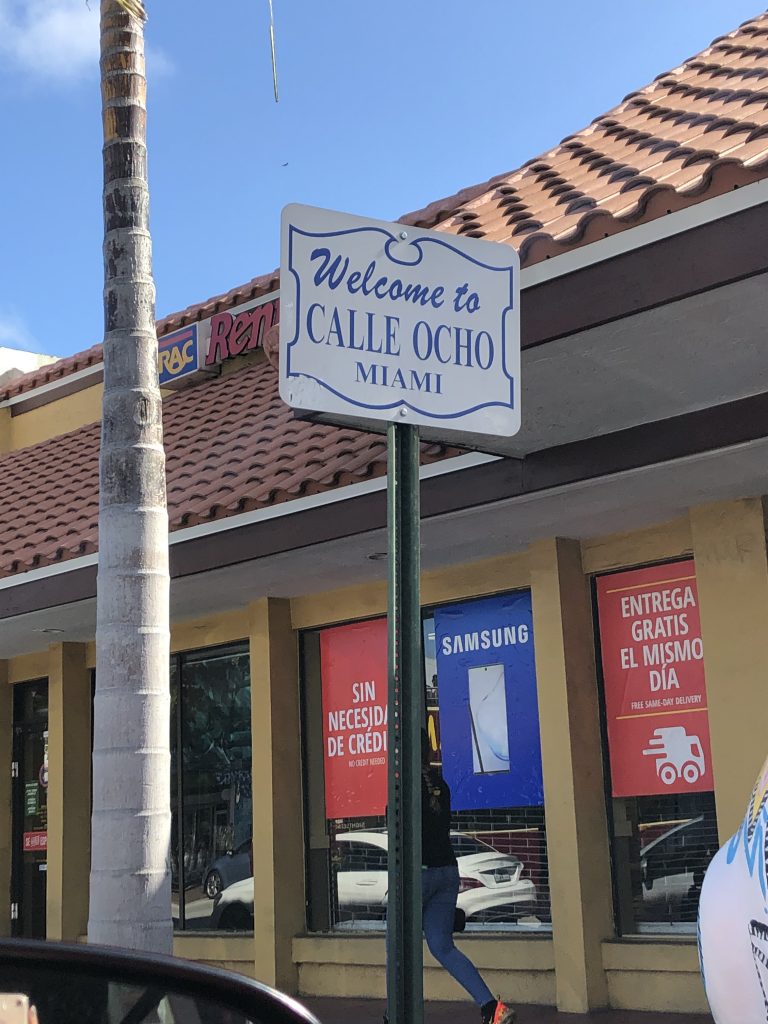 By the end of the trip, I understood people’s fascination with Miami. I felt right at home hearing Spanish spoken just as much or more than English throughout the city and I loved it. I felt at home with the music and environment and fell in love with the art of Wynwood and the beauty of Vizcaya. More trips to the city of Miami are definitely on my to-do list.

Have you ever been to Miami? Let me know in the comments or on social media. And make sure you’re following me on Instagram to catch more pictures of Miami.-T.S.

Packing and Preparing For Puerto Rico