If you follow my stories on Instagram you’ll know that last week I got to check out the newly open Pier 17 at South-Street Seaport. It’s been five years since it closed for renovations in 2013 after being hit by hurricane Sandy. Its been newly renovated with locals in mind as opposed to being a full on tourists spot. It was a day of taking my mom around to do touristy things like go to a museum that I never went to before, even though I use to walk by it everyday! Because lets face it, when you become so used to living or working in an iconic city, you forget and don’t realize how many historical attractions there are right in your backyard. That is something tourists and visitors don’t get wrong, visiting the historical and iconic spots. (Click pics to enlarge)

We finished our museum visits in the financial district and headed to South Street Seaport. If you are a tourists or potential tourists to this area, please don’t waste your money taking the subway or a taxi from the financial district to south street seaport. This is very walkable even at a leisurely pace and the blocks are a bit shorter, so enjoy the walk among the cobble stone streets and original architecture! 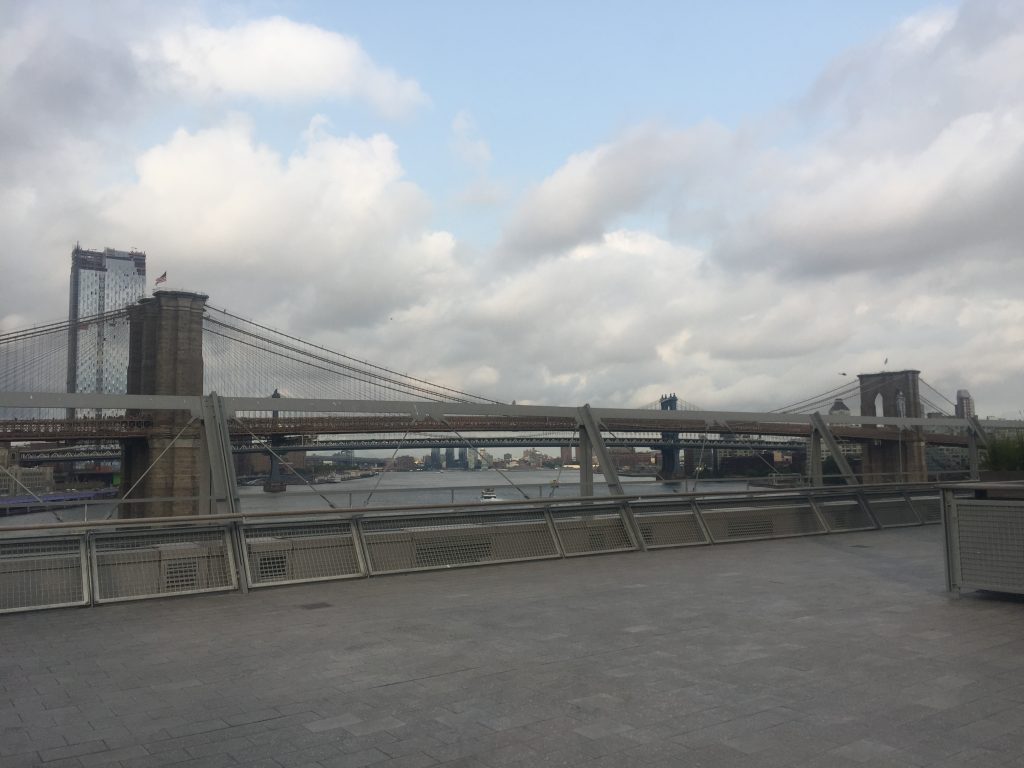 South Street Seaport and Pier 17 are not completely finished yet and some of the areas are still blocked off to the public as they continue renovations. Although what I saw was beautifully well done and has already done the area justice. I remember only a little bit about what it used to look like since I had not visited this area since I was little. I’ve worked in the financial district since, but like I mentioned before since its always there, I had not thought to go see what it looked like now. I don’t feel that bad though since it was under construction until its unveiling on June 30th 2018.

The pier itself has brand new boardwalk planks and the building is a airy with  glass windows that wraps around the building. While wood and glass continue running inside and follow outside to the back patio. Currently open are only the ground floor and the rooftop while the second floor shops are still under construction. The first floor holds the summer pop up, Market Hall restaurant and runs straight  into the back patio. Market Hall, which we ate at has a minimal menu curated by Chef David Kornell while the space itself has a nautical vibe. It was all delicious, the drinks which you can have in an alcoholic form as well were really refreshing and unlike any other drink I’ve ever had.

The back patio or River Lounge has rocker swings, lounge seats and the game cornhole for adults and kids alike to play. While a walk around will lead you to the Chase Sapphire Bar which held a ballon art installation by Geronimo and high seats to sit and watch the water. And the most impressive of it all, that Brooklyn Bridge and downtown Manhattan view. Also on the first floor is a Ticketmaster booth to  concert tickets for the south street seaport concert series. When you head up, unfortunately the middle floors are not finished, but you can head to the rooftop.

The rooftop holds stage space for concerts, intimate party space and spots to sit and take in the views. Once again the views are even more iconic as you get an above ground view of Manhattan, the Brooklyn Bridge, Brooklyn and the Manhattan Bridge. The completed rooftop will include a restaurant, outdoor bars and will span 1.5 acres. I’m looking forward to seeing what it looks like when every section of South Street Seaport is open.

Steps away from Pier 17 the historic Fulton Street shops are also reopening. Some already open are the candy store It’s Sugar and the IPic theather, the Fulton Stall Market (Farmers Market) and much more. While new stores like the Sarah Jessica Parker (SJP) boutique are yet to open.

Hidden on the basement level of Pier 17 is Level 4 an event space with views of the Brooklyn Bridge, DUMBO, and the Statue of Liberty. Its purpose will be to be rented out and used as a venue for events.  Also rentable are the rooftop, Seaport Square at the entrance of Pier 17, and the Historic District :Beekman St.-John St. and South St. – Water St.

Make sure to check out my NYC highlight on Instagram to see more on the newly open South Street Seaport. Have you checked it out yet? Let me know in the comments and on social media. Learn more here.

A New Experience: Renting an Airbnb in Puerto Rico