This is a continuation post on the current exhibition at the Museum at FIT. Read my previous post on the Arctic part of the exhibit here. This part will cover the Safari, Space and Ocean sections of the exhibition. As you walk from each section your are transported into different exploration settings. By far my favorite setting is that of the Space collection which included a futuristic spaceship inspired installation. Although choosing my favorite fashion piece would be much more difficult for me. 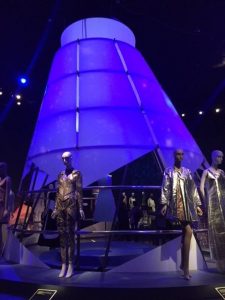 Fashion specific for expeditions came from the safari treks explorers made and their need for durable clothing. During the 19th century the wealthy took trips to Africa and returned home influenced by what they had discovered. While the world of explorations was growing so was fashion with the rise of retail in cities like New York and London. Retailers such as Abercrombie and Fitch were transcending the Khaki uniform of the safari into everyday wear for Americans.

Short semi-fitted down-filled coats were invented in the 1930’s, but were reintroduced by Mount Everest mountaineers Tensing Norgay and Sir Edmund Hillary on 1953. While military inspired jackets came thanks to the Korean war and the M-8 and M-51 jackets worn by the military. By the 1970’s down-filled jackets were being created by both fast fashion brands and higher end houses.

Expeditions to the moon and space age discoveries inspired designers during the 1960’s. Parisian designers André Courreges, Paco Rabanne and Pierre Cardin lead the way in bringing the youth quake fashions of London and New York to Paris. Miniskirts, sleek pantsuits, metallic and plastic fabrics were some of the major trends of this movement. Combining the craftwork of couture and youthful modernity made these designers the pioneers for trendy Parisian fashion.

By the 1950’s deep sea divers were wearing light weight scuba suits. As opposed to the heavier helmet and suit of the past, which were only worn by explorers. The lighter suit encouraged the public to explore the underwater world. By the 1960’s famed editor Diana Veerland directed Vogue magazine to shoot models in wetsuits, mask, google, and flippers. Other magazines followed suit expanding on the trend. By the 1980’s the scuba material neoprene was being used by fashion designers in both couture and ready to wear.

Now you know who you can thank for the everyday puffers and stretchy neoprene pants! The Exhibition Expedition Fashion From the Extreme is on display at the Museum at FIT until January 6th.