Currently on display at the Museum of FIT is the exhibition “Force of Nature”. It explores the inspiration nature and science lends to fashion designers. The animals, weather, plants and foreign landscapes that were discovered in the 18th and 19th centuries inspired not only the scientists and writers of the day but the designers as well. Some designers took literal interpretations of nature while others simply referenced it. It also takes a look at how the fashion industry has made and is making changes that respect the environment.

Through the collection of garments, textiles, accessories and prints viewers can see how men and women’s fashion was and is inspired by nature. During the time of Enlightenment there was a surge of botanic gardens in society. This inspired designers to create textiles and fashions inspired by flowers. While the discovery of different animals also changed the way people used prints. In the wild animals use their spots to camofloufge themselves but designers use them in bold designs.

Animals like caterpillars and butterflies that have the ability of transformation which also inspire designers. Fashions that transformed women into flower or bird like forms are the result. The theory of attraction in the wild also stirred up new ideas for creators of the arts.

The Network of Nature

Naturalist and father of ecology Alexander von Humboldt realized how nature was intertwined with society. He also believed that an artists interpretation of nature was paramount in understanding it. Forms of diversity and creativity were created and inspired because of nature.

Enlightenment and the discovery of exotic plants in foreign lands introduced the creation of the botanic garden in Europe. The public became fascinated with the new plant life and were curious to learn more. The botanic garden was a place were all social classes could view these new discoveries. By the 19th century these gardens became known as laboratories for scientific discoveries as well as beautiful gardens.

The discovery and study of nature was intensive for people of the Victorian era. The use of cataloging and the organization of all findings was important. With the invention of the microscope naturalists like Ernst Haeckel and scientists educated and influenced the public and arts. Haeckel, also an artists created prints and art inspired by his discoveries.

Birds symbolize transformation, freedom, honor and grace amoung other things. Throughout history they were used in art, literature and folklore in many cultures. While their feathers were seen as mysterious for people of the past, they are inspirational for today’s designers.

The discovery that caterpillars turned into butterflies was in 1830’s Chile by German naturalist Renous. Because he did not get a chance to unveil his findings he was arrested because people did not believe him. The butterflies were not seen as a natural transformation but a trick. The act of transformation and the ability of fashion to transform a person has inspired designers.

The patterns that camouflage animals in the wild for their self preservation inspire designers to create bold prints that attract the eye. The exotic and at times sensual appeal of animal patterns come from ancient folklore. 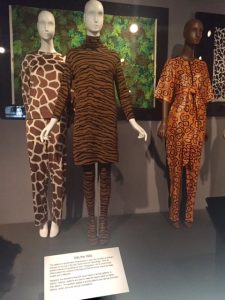 The study of nature and energy both in small particles and entire galaxies known as physics has inspired society and the arts. These studies lead to the creation of meteorology, astronomy, electromagnetism and many other fields of scientific study.

In the past fashion was created with little to no knowledge or realization on how it was affecting nature. However over the years designers and fashion companies have begun to create sustainable fashion. Kering the parent company of the brands Alexander McQueen, Balenciaga, Stella McCartney, Puma and more has made it their mission to reduce the environmental impact their brands have. With guidance from the UN Sustainable Development Goals Kering has created reachable targets of positive global environmental and social impacts by 2025. With their three strategies of Care, Collaborate and Create these brands can change the way fashion is created. Among other streams of creativity and science these brands can care for the planet through cleaner supply chains. They can collaborate with craftsmen and leading universities that identify sustainable solutions. Lastly they can create using innovative technology like biotech.

The Science of Attraction

In 1859 Charles Darwin published “On the Origin of Species”. This controversial theory of evolution and his later work ” The Descent of Man” which focused on sexual selection and beauty influenced the arts. In the end one of his conclusions was that both animals and humans loved beauty.

The Language of Flowers

During the 19th century books were published that explored the “language of flowers”. They surmised that specific species and colors held symbolic meanings. This influenced the exchange of different colored bouquets as coded meanings to and from lovers and couples. As a reproductive organ flowers also represented human sexuality.

It was interesting to learn about all ways in which nature and science have influenced fashion. As we look at today’s fashion we don’t realize how influential nature has been. This exhibition is a great reminder of how much nature has and continues to inspire us. Stay tuned to my Instagram for more pictures throughout the week. Force of Nature is on display at the Museum at FIT through November 18th.

In Pursuit of Fashion: The Sandy Schreier Collection