For almost an entire year I’ve been wanting to make my way to visit a very famous lady.  Who’s this lady you ask? The Statue of Liberty of course! I wanted to visit her because I had no recollection of when I visited her as child. I also made my way to Ellis Island, the gateway for so many people whose families are still here today. As a person who lives in the northeast sometimes I think we take for granted how many iconic landmarks we walk amongst each day and how easy it is to see them.  Although the U.S. is not perfect and has many issues to fix sometimes as citizens we can take for granted the liberties we are given from birth.

I still believe if you work hard enough you can make your own life better. I’ll tell you why I feel this, although my hustle has not been easy and nor did I expect it to be with education and hard work I’ve been able to accomplish a lot of my goals at a young age. Since the moment I decided to go into the fashion industry in middle school I knew there would be a thousand no’s and shed tears. Through it all the fact is that freedom to choose has allowed me to get a great education, gain experience and follow my passion. Although we are still working towards equal pay I have enjoyed working in a predominantly female industry.

And to be totally honest, with all that’s going on in the country I wanted a reminder of why people consider this country the land of opportunity amongst other things. The trip was both enlightening and sad as the fight for freedom, equality and justice is never easy.

First stop off the Ferry: Statue of Liberty 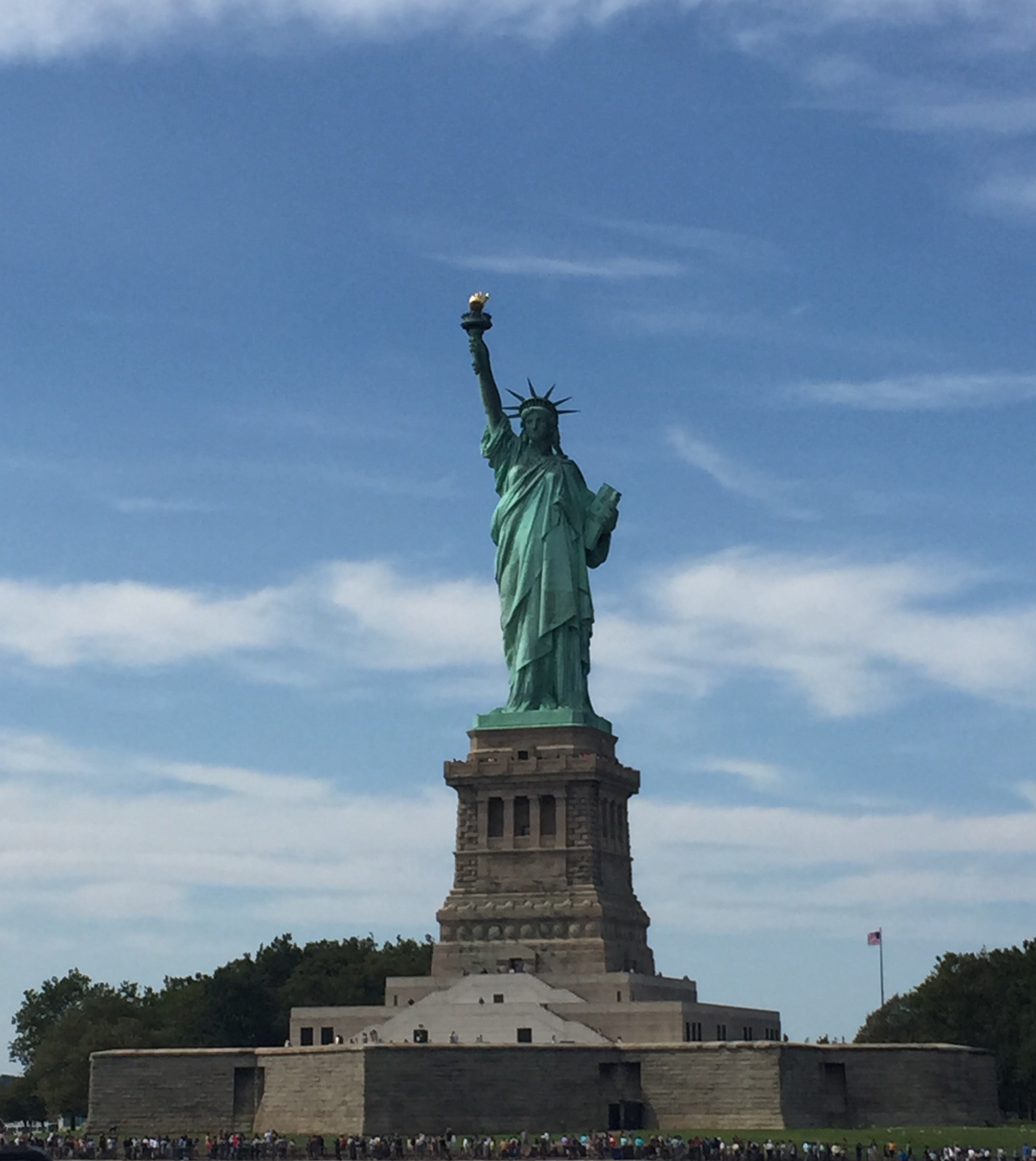 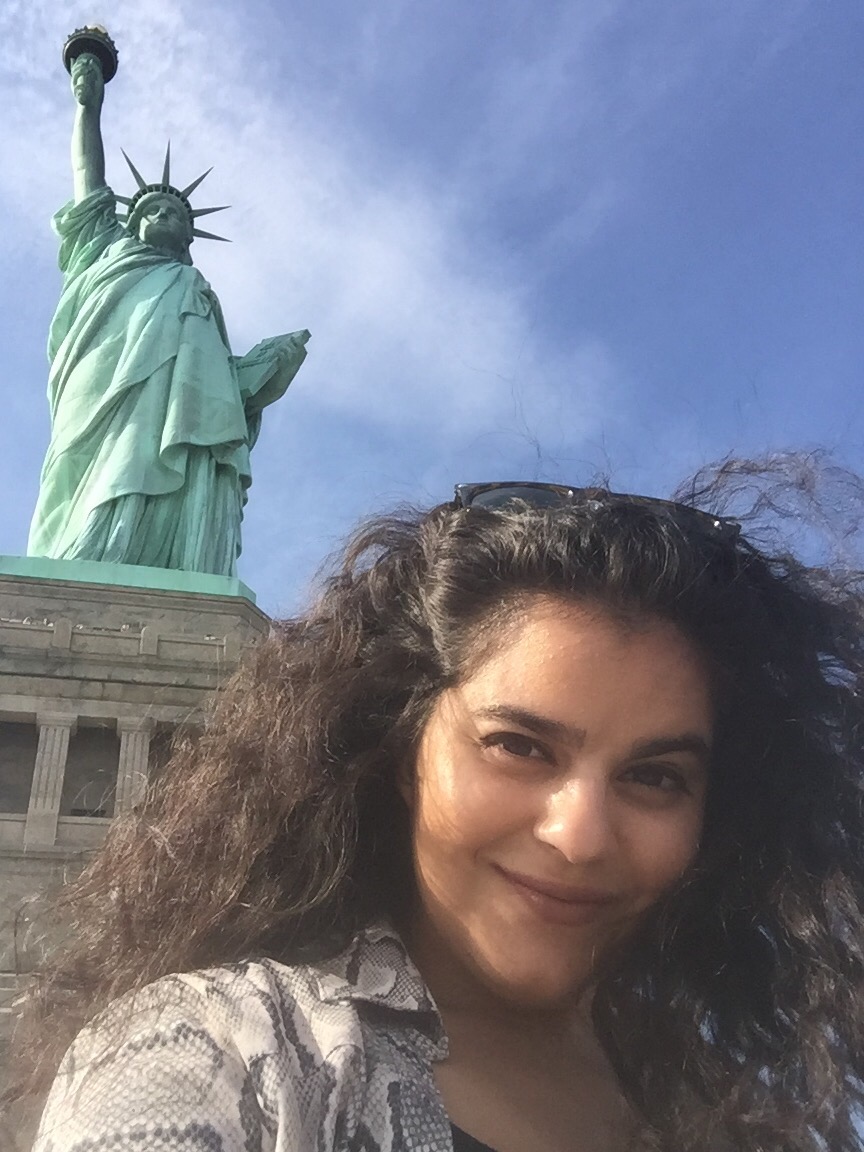 At the Fort Wood base, a selfie magnet.

Visiting the Statue of Liberty is not for the faint of heart. I bought tickets to the pedestal which took a total of 215 steps. A glutton for punishment I gasped my way up the stairs, in the end it’s worth it when I reached the top. Access to the crown is possible and I hope to visit it one day. My tip is buy your tickets weeks or even months in advance and choose which ferry you want to take. Bear in mind that tickets sell out fast and the longer you wait in the year the colder NYC gets. Freezing on a boat and walking around a tiny island surrounded by water and wind is not my idea of fun. I took the subway to Battery Park and boarded a ferry from there which I found easiest.

Conception of Lady Liberty began in the 1800’s. After political repression in France intellectual Edourad de Laboulaye and sculptor Auguste Bartholdi wanted to honor the ideas of freedom and liberty that came with the end of slavery and the civil war.

After touring the U.S. Bartholdi chose the New York Harbor in 1871. After two years of fundraising her arm and torch were put on display in Paris and at the Centennial Exposition in Philly. Architect Gustav Eiffel creator of the Eiffel Tower designed the internal framework in 1879. The statue was assembled and the beginning of the foundation started in 1881-84.

Bartholdi and Hunt pedestal designs.  Bronze plaque by Tiffany  and Co. dedicated to the men who constructed the pedestal without any casualties.

Architect Richard Morris Hunt designed the pedestal in 1884. The cost of building the pedestal and placing the statue on top was $300,000. Money raised by “The American Committee” covered half of the cost then soon ran out. Joseph Pulitzer and his newspaper began fundraising for the pedestal in 1885 and by October of 1886 it was reassembled and dedicated on Bedloe’s Island (Liberty Island).

Replica of her face which Bartholdi and many said looked like his mother. Replica plaster model of the left ear.

A symbol of the French and American alliance the statue was considered a gift from France. The French raised 600,000 francs over five years via fundraising to create the statue. They achieved this by holding lotteries and selling tickets that allowed the public to see the statue under construction. The sale of a mother of pearl napkin ring and allowing small models to be made and sold to the public also raised money.

Replica’s sold by the French to raise money 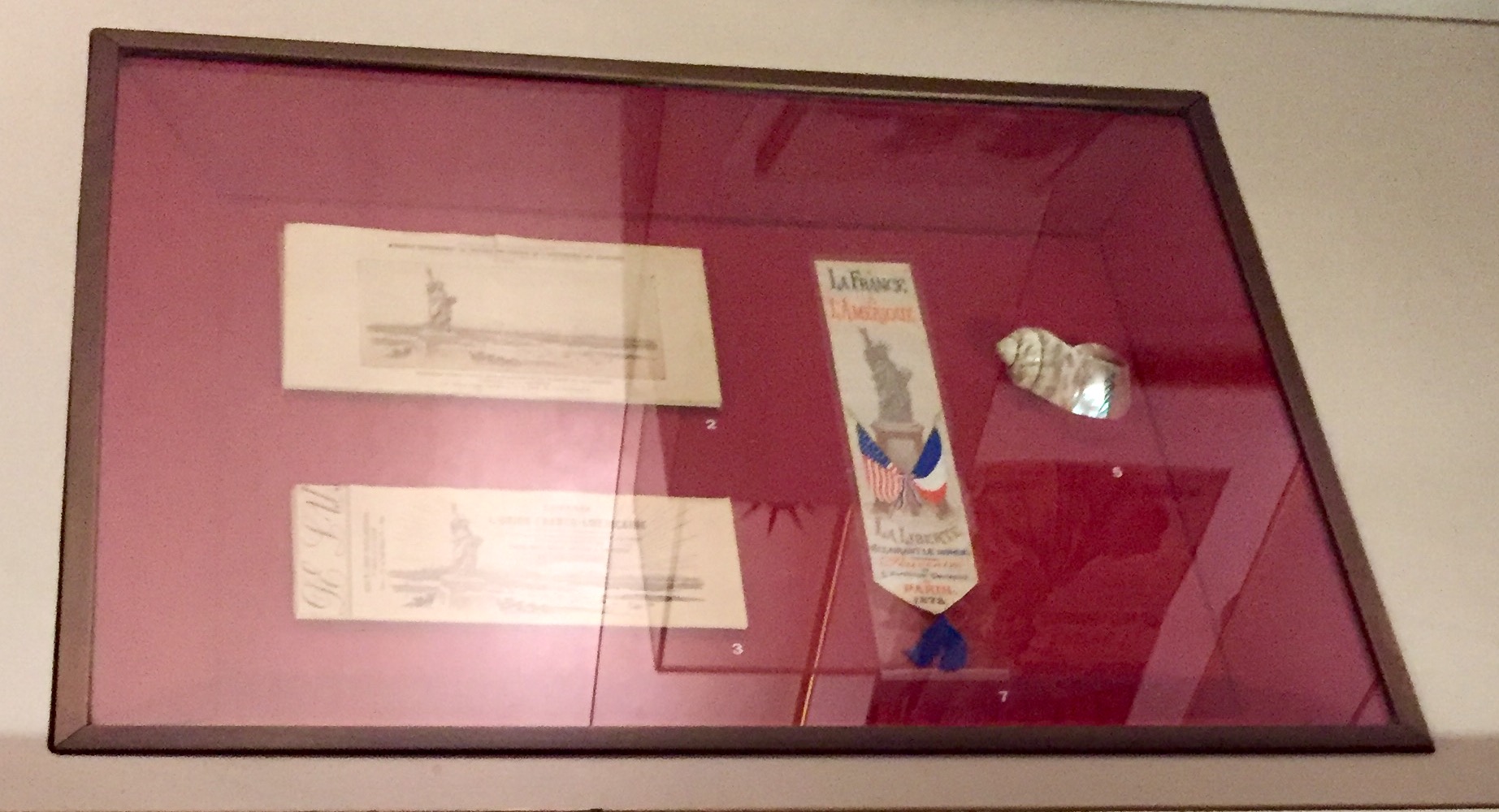 Although the French contributed the cost that America was paying to make the pedestal made many Americans criticize the statue. New Yorker’s felt like the rest of the country should’ve helped pay for the pedestal and placement of the statue. The rest of America felt New York was responsible for the cost as it was to be placed there. Both the lower class and upper class citizens disliked the statue. The upper class saw the statue as a populist symbol and the lower class saw it as a rich man’s hobby. The amount of time it took to complete the statue was ridiculed by many if not all Americans. 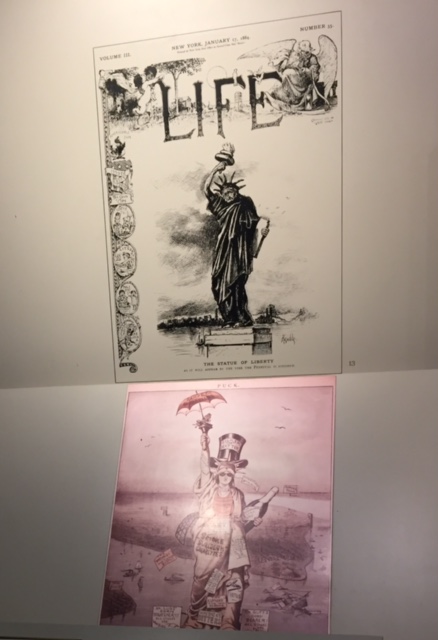 Publications criticizing the time and money needed to complete the statue.

Wooden molds and hammers pressed the copper into shape. Gustav Eiffel designed the inner frame work and the iron bars that strengthens the copper and supports the statue against natural elements. 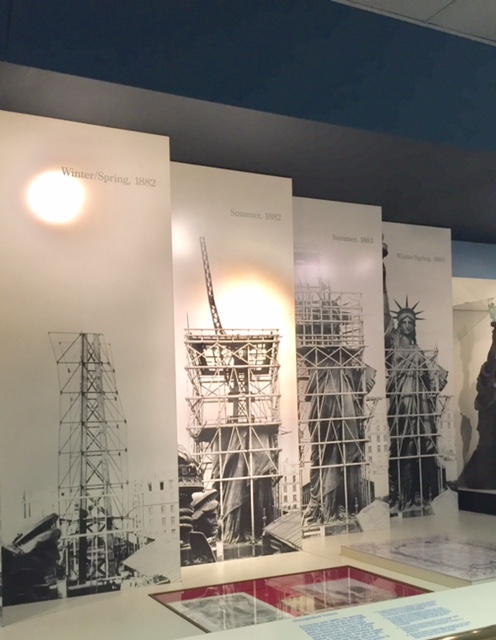 Assembly stages from Autumn 1882-Winter/Spring 1884 in France before she was dissembled and shipped to the U.S. She was resembled in NYC in 1886 after the pedestal was completed.

Newspaper reports on the parade the day the statue arrived. Tools used to reassemble the statue.

Memorabilia and writer Emma Lazarus. Emma Lazarus donated her poem “The New Colossus” to help raise money for the statue. In 1903 the poem was engraved on a bronze plaque and placed on the base of the statue. In the 1930’s the poem’s message “give me your tired, your poor. Your huddled masses yearning to breathe free” was popular as many came to the U.S. fleeing fascist countries. 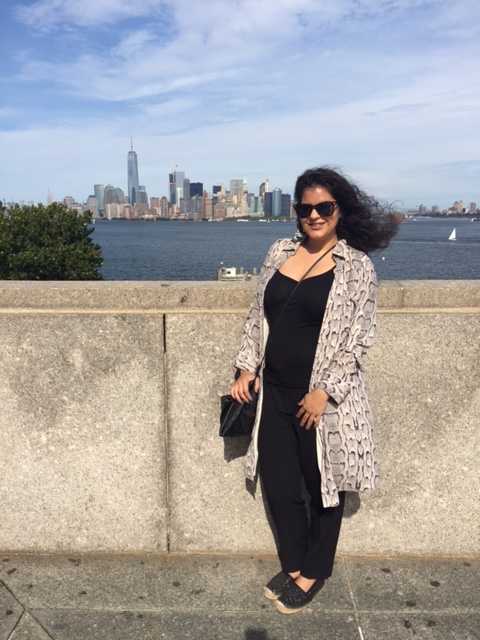 In late 1800’s  when Ellis Island opened she was known as the “Mother of exiles” when a huge influx of immigrants migrated to the USA. As WWI began she was used to encourage men to enlist and buy war bonds and is continually used as a face for many causes.

I hope I taught you a bit about the Statue of Liberty. I will have a follow up post about the torch and Ellis Island soon. Let me know if you have made your way to either or if you plan to.

“I had reasoned this out in my mind, there were two things I had a right to, liberty and death… If I could not have one, I would have the other..”- Harriet Tubman